Objective:
To better understand when to go to ground and when to stay big and narrow the angle. Within a distance of 4-6 yards from the goalkeeper depending on the age and skill set of the goalkeepers involved.

Set up:
Dimensions:
2 grids with a 2-yard channel between the two grids. Recommended grid size: 4 x 4 yards or 4 (width) x 6 (length) for advanced goalkeepers. The size of the grid can vary based on the age and skill set of the goalkeepers involved.

1 Goalkeeper starts in the channel facing the Coach/Server (orange). The goalkeepers needs to be in such a set position that they can go either left or right depending on the direction of the service. If more than 3 gk’s involved the extra gk is waiting “on deck” to come in.

Restrictions are that the two “forwards” have to take two touches, not one and not three but always two.

Play begins with the Server playing a ball to either forward. The ball speed can be varied from easy to difficult to handle, playing harder balls can make the drill more functional as they are harder to settle for a second touch. The forward attempts to settle the ball with the first touch and then attempts to “score” with the second touch. To score, the forward needs to play the ball past the gk and through the channel. The Goalkeeper reacts to the direction of the serve and then has to determine if (based on the forwards first touch) they should go to ground (1v1 save) or step into the grid, narrow the angle and stay big.

If the forward scores, the goalkeeper stays until they make a save. All players involved reset and the server plays another ball.

I call this exercise “The Distance of Death”. Why… Because I believe that the distance of 4-6 yards from the goalkeeper poses the question of “should I stay or should I go?” And it’s with this one question that goalkeepers can either make the game winning save or give up the game-winning goal.

Determining if a goalkeeper should go to ground or stay big and narrow the angle is about recognizing a few key elements such as:

One of the reasons that I refer to the 4-6 yard distance as “The Distance of Death” is because many times the goalkeeper, especially younger goalkeepers, have a hard time determining what is a controlled/uncontrolled touch and how distance form the goalkeeper helps determine if a touch is controlled vs uncontrolled.

Let me provide an example:
If a attacker is 10 yards from the goalkeeper and takes a 2 yard touch… The goalkeeper would in most instances narrow the angle, stay big and prepare for the shot, not go running out and go to ground. But now that same 2-yard touch at 6 yards from the goalkeeper becomes a bit more difficult to judge. Should you go and go to ground or should you narrow angle, stay big and react? This is the question I hope to solve with this training exercise. 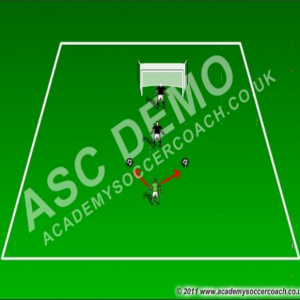